skip to main | skip to sidebar

The average amount for a medical malpractice claim paid in Massachusetts for 2007 is $530,963. This is the third highest avg. claim paid in the nation according to statistics compiled by The Henry J. Kaiser Family Foundation, whose statehealthfacts.org web site. The two states ranking higher than Massachusetts in avg. size of claim paid are Wyoming and Illinois with $641,692 and $634,971 per claim avg.

The web site offers comparative statistics on medical malpractice claims paid in all 50 states. Leading the pack in total dollars paid is New York state with $674,683,750 (an average of $441,547 per claim paid). Massachusetts ranks 7th in total claim dollars paid with $148,669,500.

The table below offers data on the top ten state's in average amount of medical malpractice claims paid (2007)... 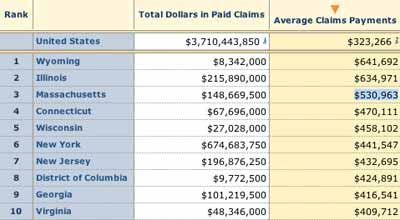 Use of this web site and its content is for informational purposes only. It is not written by a lawyer and it does not provide legal advice. Care is taken to provide accurate information at the time of publication, but there is no guarantee that all information is accurate. Any links to other web sites are for convenient access to related information, and do not constitute endorsements of those web sites or the information provided on those sites. For proper legal counsel you must speak to an attorney in your state.